When we originally came up with the concept for Spirit, we were a bunch of green, bright-eyed second-year undergrads, a little ragged from surviving our first year, but diehard optimists nonetheless. Inevitably, within a few weeks of beginning our first semester, the second-year curriculum had already kicked our teeth in, knocked us to the ground, and started dancing on our broken glasses, just for kicks. You see, our program has us create a game engine from scratch before so much as touching a prebuilt one, a form of education which proved to be both incredibly valuable and inexplicably cruel.

Our shepherd in this matter was the legendary Dan Buckstein, who in the space of a year was responsible for teaching us everything from quaternion math to bloom shaders. However, one of the most invaluable topics covered came along fairly early in the year, in the form of interpolation. While the most obvious application of this technique is the generation of paths from a series of waypoints, I would be remiss if I neglected to mention that interpolation itself is an algorithm applicable to a wide range of objectives – skeletal animation, colour gradients, image warping, and physics approximation, to name a few – after all, it’s just data (thanks, Dan).

Today, I’ll be focusing on path animation, something we used quite extensively to create animations in our original prototype. Since we were stuck without an existing engine as a starting point, we built a basic level editor for our original custom engine (the OG engine, as we dubbed it). The editor had several features built in for creating and transforming objects in a level, with a few sub-editors for object properties – path animation, collision, and in-game properties. 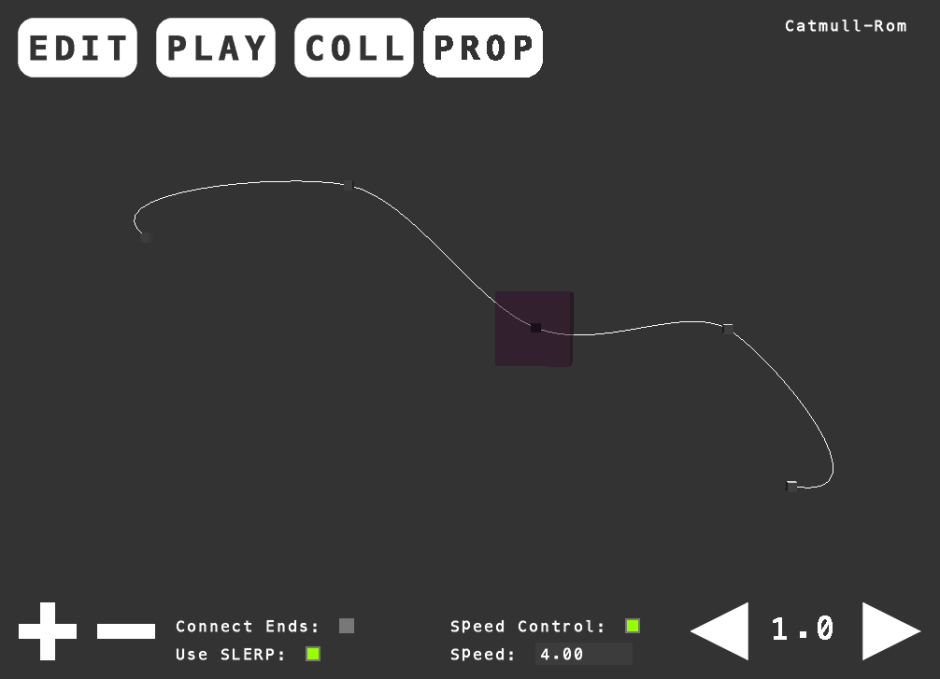 If we’re being honest, the path animation editor started as nothing more than a homework requirement, though it became eminently more useful as the year went on – particularly for particle effects, as we could use it to create breadcrumb trails and little flourishes of light and sparks that brought life to even the dustiest corners of the game.

In making the switch to Unity, we had initially [naively] assumed that Unity would have a more polished inbuilt path animation system. Much to our chagrin, despite its myriad of useful features, Unity has no such system out-of-the-box. You can achieve basic linear animations using the animation editor, or use navmesh-based traversal for AI characters, but the vanilla editor is somewhat lacking in the way of path animation. So, if we want to animate our particle systems, or camera, or anything, along a spline that we can visualize in the scene, we need to develop our own system.

Our system will require a few key features to constitute a working prototype:

I’m going to start by tackling #2, as an understanding of interpolation forms the fundamental basis of any path animation system. Interpolation experts can feel free to skip ahead, and those completely unfamiliar with the topic should definitely look into some further personal research – a firm grasp on the concepts of different kinds of interpolation is immensely helpful in a surprising number of applications.

The basic concept of interpolation is this – you have a number of waypoints, and an equation for defining a curve based on those waypoints. Anything you animate along that curve runs off of a timer – that timer (well, a normalized version of it) is used as input, along with some of your waypoints, to an equation that spits out a point in space representative of your object’s position on the curve at the current moment in time. And that’s it. The equation that you choose defines how your curve will look – a series of lines, a smooth curve, a fancy Illustrator-style Bézier curve, and so forth.

For our path editor, we’ve chosen to support basic linear interpolation, Catmull-Rom interpolation, and cubic Bézier interpolation. Here’s what each of those looks like in a very basic nutshell – I won’t go into the reasoning behind the math here, though you can and should read the mathematics behind each one of these methods.

(Note that the t in each case is the object’s timer for the current frame/waypoint divided by the total time for that segment of the path – something that you can define manually, or with speed control, discussed below.) 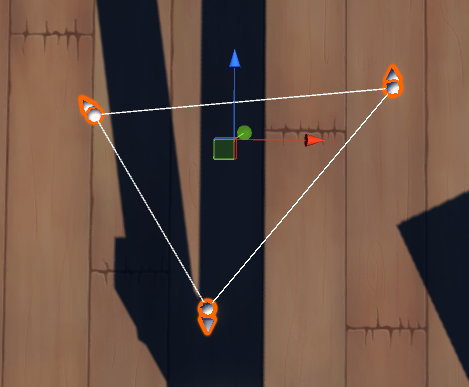 (For this implementation of Bézier, points p1 and p2 are actually the handles on the curve, which essentially define tangents that can shape smooth or sharp corners, or create loops, as I’ve done above.)

Note that each of these curves uses waypoints that are more or less in the exact same positions – so the interpolation method you choose is instrumental in determining how the final animation will look.

To define your object’s motion along the path, you have a couple of options; you can manually define the time taken for each curve segment – which requires a lot of tweaking and causes inconsistent speeds along tight curves, or you can implement a technique called speed control. Speed control lets you define your object’s desired movement speed and uses a table of curve samples to create smooth, consistent motion. The process goes something like this:

Using these concepts, it’s fairly obvious how you might build a simple system for storing a path and animating objects along that path – keep a list of Transforms pointing to your waypoints in the scene, use their positions for interpolation and/or subsampling, and adjust your object’s trajectory in the Update function.

The real magic here is in creating a custom editor for your paths, so that you can switch between interpolation methods, add and remove waypoints, push them around, and watch as your path changes in the scene. Here’s an example of what we’re shooting for (excuse GIF quality):

To achieve this, we’ll want to append the [ExecuteInEditMode] tag to our main path script for the purposes of gizmo drawing, and create a basic Editor script with a custom layout for adding/removing waypoints and setting them up automatically on our curve. Check out Unity’s documentation on the Editor utility, GUILayout, and SerializedProperties for a quick rundown, and make sure to tag your Editor script with [CustomEditor(typeof(YourClass))] To display custom property fields, we’ll need to grab a handle to the serialized version of our object:

private void OnEnable()
{
//The 'target' variable is built-in to the Editor class.
//Cast it according to the class type for which you're building your Editor.
path = (OGPath)target;
serial = new SerializedObject(path);

From here, we can grab properties using the FindProperty function, and display those using PropertyFields in OnInspectorGUI – just remember to call Update on your serialized object at the beginning of the routine, and ApplyModifiedProperties at the end, lest you be baffled by checkboxes that refuse to change. Here’s an example of how that looks:

//Insert PropertyFields, Layout functions, buttons, etc.
//Check out the documentation for some examples of what you can do.
//Here's a snippet of what we used for our purposes:

if (GUILayout.Button("Set to Linear..."))
path.SetInterpolationMode(OGPath.PathMode.Linear)
//...And so on for your other Inspector functionality...

Getting the curve to display in the editor was far easier than I had anticipated – simply implement the OnDrawGizmos function in your main path script, and use the DrawLine function to plot your curve along your waypoints (in the case of LERP) or your subsample table (if you’re using Catmull, Bézier, or some other more complex method). Bézier can be a bit tricky due to the fact that some waypoints are actually “handles” – I got around any potential confusion for our level designers by keeping the handles in a separate list, so that swapping between different interpolation methods would keep a more consistent general trajectory. Regardless of how you choose to handle different curves (sorry), though, a custom editor is key, and not all that difficult to set up. The resulting prototype functions something like this:

In the couple of weeks since developing our initial prototype, we’ve extended it to support features like transitioning between curves, modes of object rotation, and a basic cutscene system built on chaining and timing multiple paths together.

In the next couple of weeks, I’ll be posting an update on working more in-depth with Unity’s systems for implementing custom editors, property drawers, and so on. Until then, it’s back to the grindstone! Thanks for reading.

Feel free to reach out in the comments if you have any questions or you’d like to add to the discussion!